Skip to content
So far i have explained about the Traditional Cross site scripting that occurs because of insecure server-side code. In this post , i am going to explain the DOM Based Cross Site Scripting vulnerability. if you don’t what cross site scripting is, then i recommend you to read the basics from here.

Before explaining about the DOM based xss, let me explain what DOM is.

DOM is expanded as Document object model that allows client-side-scripts(Eg: Javascript) to dynamically access and modify the content, structure, and style of a webpage.

Like server-side scripts, client-side scripts can also accept and manipulate user input with the help of DOM.

Here is a very simple HTML code that accepts and writes user input using JavaScript with the help of DOM.

If you know HTML and Javscript, understanding the above code is a piece of cake.
In the above example, the javascript code gets value from the url parameter “BTSinput” and writes the value in our webpage.

For example, if the url is

The webpage will display “default” as output.

Did you notice ?! The part of the webpage is not written by Server-side script.  The client side script modifies the content dynamically based on the input.   Everything done with the help of DOM object ‘document’.

DOM Based XSS vulnerability:
When a developer writes the content using DOM object without sanitizing the user input , it allow an attacker to run his own code.

In above example, we failed to sanitize the input and simply displayed the whatever value we get from the url.

An attacker with malicious intention can inject a xss vector instead .  For example: 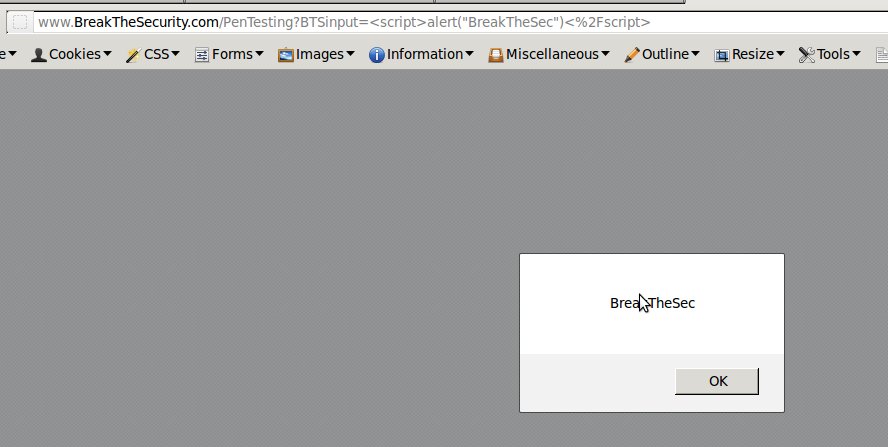 As i said earlier, the document.write function simply writes the value of BTSinput parameter in the webpage.  So it will write the ‘<script>alert(“BreakTheSec”)</script>’ in the webpage without sanitizing.  This results in running the script code and displays the alert box.


Patching the DOM Based Cross Site Scripting Vulnerability
Audit all JavaScript code in use by your application to make sure that untrusted data is being escaped before being written into the document, evaluated, or sent as part of an AJAX request. There are dozens of JavaScript functions and properties which must be protected, including some which are rather non-obvious:

You can use the JavaScript built-in functions encode() or encodeURI() to handle your escaping. If you write your own escaping functions, be extremely careful. Rather than using a “black list” approach (where you filter dangerous characters and pass everything else through untouched), it is better to use a “white list” approach. A good white list approach is to escape everything by default and allow only alphanumeric characters through.