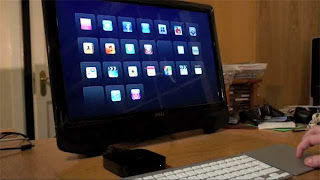 Now you can run iOS apps in your Tv, iOS app developer Steve Troughton-Smith found a way to run the iPhone and iPad apps in Apple Tv. He published the demo video in youtube.

This video shows them demonstrating some apps like Angry Birds, Facebook, Maps, Safari and YouTube on a hacked Apple TV. This is not AirPlay, the apps are running directly from the Apple TV and scaling to 720p.

MobileX is a window manager for iOS that replaces Springboard, letting iPhone and iPad apps run on the Apple TV. Since the Apple TV doesn’t have a touch screen, they are using a combination of VNC, SSH and the Apple Remote to launch and navigate apps. Once they are done, you will be able to launch apps using only the remote.

“I’m @stroughtonsmith and MobileX was built by @TheMudkip, and we’ve spent the past two days together making this work on AppleTV. If Apple isn’t going to give us a way to make real AppleTV apps, then I guess we’ll have to make one ourselves :-)”  said in youtube.