First of all download and install the virtual box.


After installation, you can start VirtualBox as follows:

On a Windows host, in the standard “Programs” menu, click on the item in the “VirtualBox” group. On Vista or Windows 7, you can also type “VirtualBox” in the search box of the “Start” menu.

On a Mac OS X host, in the Finder, double-click on the “VirtualBox” item in the “Applications” folder. (You may want to drag this item onto your Dock.)

On a Linux or Solaris host, depending on your desktop environment, a “VirtualBox” item may have been placed in either the “System” or “System Tools” group of your “Applications” menu. Alternatively, you can type VirtualBox in a terminal.

When you start VirtualBox for the first time, a window like the following should come up: 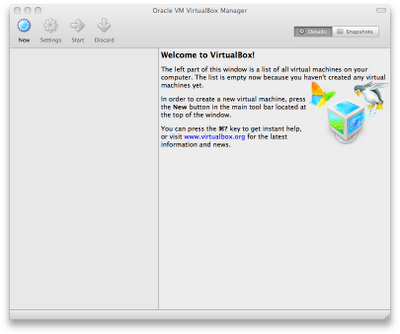 This window is called the “VirtualBox Manager”. On the left, you can see a pane that will later list all your virtual machines. Since you have not created any, the list is empty. A row of buttons above it allows you to create new VMs and work on existing VMs, once you have some. The pane on the right displays the properties of the virtual machine currently selected, if any. Again, since you don’t have any machines yet, the pane displays a welcome message.

To give you an idea what VirtualBox might look like later, after you have created many machines, here’s another example: 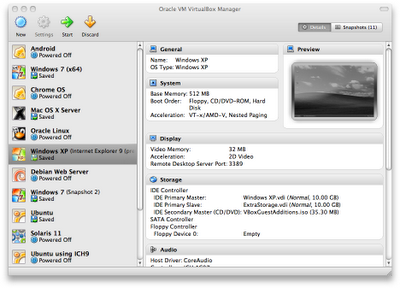 Click on the “New” button at the top of the VirtualBox Manager window. A wizard will pop up to guide you through setting up a new virtual machine (VM): 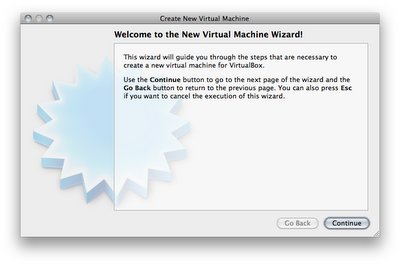 On the following pages, the wizard will ask you for the bare minimum of information that is needed to create a VM, in particular:

The VM name will later be shown in the VM list of the VirtualBox Manager window, and it will be used for the VM’s files on disk. Even though any name could be used, keep in mind that once you have created a few VMs, you will appreciate if you have given your VMs rather informative names; “My VM” would thus be less useful than “Windows XP SP2 with OpenOffice”.

On the next page, select the memory (RAM) that VirtualBox should allocate every time the virtual machine is started. The amount of memory given here will be taken away from your host machine and presented to the guest operating system, which will report this size as the (virtual) computer’s installed RAM.

Note:Read Slow
Choose this setting carefully! The memory you give to the VM will not be available to your host OS while the VM is running, so do not specify more than you can spare. For example, if your host machine has 1 GB of RAM and you enter 512 MB as the amount of RAM for a particular virtual machine, while that VM is running, you will only have 512 MB left for all the other software on your host. If you run two VMs at the same time, even more memory will be allocated for the second VM (which may not even be able to start if that memory is not available). On the other hand, you should specify as much as your guest OS (and your applications) will require to run properly.

A Windows XP guest will require at least a few hundred MB RAM to run properly, and Windows Vista will even refuse to install with less than 512 MB. Of course, if you want to run graphics-intensive applications in your VM, you may require even more RAM.

So, as a rule of thumb, if you have 1 GB of RAM or more in your host computer, it is usually safe to allocate 512 MB to each VM. But, in any case, make sure you always have at least 256 to 512 MB of RAM left on your host operating system. Otherwise you may cause your host OS to excessively swap out memory to your hard disk, effectively bringing your host system to a standstill.

As with the other settings, you can change this setting later, after you have created the VM.

Next, you must specify a virtual hard disk for your VM.

There are many and potentially complicated ways in which VirtualBox can provide hard disk space to a VM (see Chapter Virtual storage for details), but the most common way is to use a large image file on your “real” hard disk, whose contents VirtualBox presents to your VM as if it were a complete hard disk. This file represents an entire hard disk then, so you can even copy it to another host and use it with another VirtualBox installation.

The wizard shows you the following window: 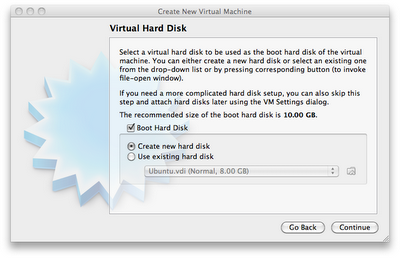 Here you have the following options:

You can pick an existing disk image file.

The drop-down list presented in the window contains all disk images which are currently remembered by VirtualBox, probably because they are currently attached to a virtual machine (or have been in the past).

Alternatively, you can click on the small folder button next to the drop-down list to bring up a standard file dialog, which allows you to pick any disk image file on your host disk.

Most probably, if you are using VirtualBox for the first time, you will want to create a new disk image. Hence, press the “New” button.

This brings up another window, the “Create New Virtual Disk Wizard”, which helps you create a new disk image file in the new virtual machine’s folder.

A dynamically allocated file will only grow in size when the guest actually stores data on its virtual hard disk. It will therefore initially be small on the host hard drive and only later grow to the size specified as it is filled with data.

A fixed-size file will immediately occupy the file specified, even if only a fraction of the virtual hard disk space is actually in use. While occupying much more space, a fixed-size file incurs less overhead and is therefore slightly faster than a dynamically allocated file.

To prevent your physical hard disk from running full, VirtualBox limits the size of the image file. Still, it needs to be large enough to hold the contents of your operating system and the applications you want to install — for a modern Windows or Linux guest, you will probably need several gigabytes for any serious use: 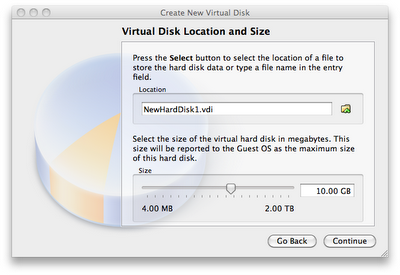 When you select a virtual machine from the list in the Manager window, you will see a summary of that machine’s settings on the right.

Clicking on the “Settings” button in the toolbar at the top brings up a detailed window where you can configure many of the properties of the selected VM. But be careful: even though it is possible to change all VM settings after installing a guest operating system, certain changes might prevent a guest operating system from functioning correctly if done after installation.
Note

The “Settings” button is disabled while a VM is either in the “running” or “saved” state. This is simply because the settings dialog allows you to change fundamental characteristics of the virtual computer that is created for your guest operating system, and this operating system may not take it well when, for example, half of its memory is taken away from under its feet. As a result, if the “Settings” button is disabled, shut down the current VM first.

When a VM gets started for the first time, another wizard — the “First Start Wizard” — will pop up to help you select an installation medium. Since the VM is created empty, it would otherwise behave just like a real computer with no operating system installed: it will do nothing and display an error message that no bootable operating system was found.

For this reason, the wizard helps you select a medium to install an operating system from.

If you have physical CD or DVD media from which you want to install your guest operating system (e.g. in the case of a Windows installation CD or DVD), put the media into your host’s CD or DVD drive.

Then, in the wizard’s drop-down list of installation media, select “Host drive” with the correct drive letter (or, in the case of a Linux host, device file). This will allow your VM to access the media in your host drive, and you can proceed to install from there.

If you have downloaded installation media from the Internet in the form of an ISO image file (most probably in the case of a Linux distribution), you would normally burn this file to an empty CD or DVD and proceed as just described. With VirtualBox however, you can skip this step and mount the ISO file directly. VirtualBox will then present this file as a CD or DVD-ROM drive to the virtual machine, much like it does with virtual hard disk images.

For this case, the wizard’s drop-down list contains a list of installation media that were previously used with VirtualBox.

If your medium is not in the list (especially if you are using VirtualBox for the first time), select the small folder icon next to the drop-down list to bring up a standard file dialog, with which you can pick the image file on your host disks.

In both cases, after making the choices in the wizard, you will be able to install your operating system.