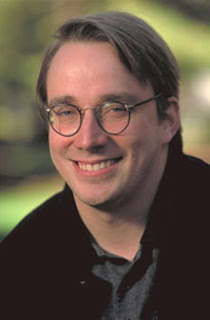 Hi Break The security readers, today let us know about Linus Torvalds ,the one who inspired me lot.

Linus torvalds born on December 28,1969 at Helsinki in Finland, father of our Linux.  He is known as software engineer and hacker.

“If you want to travel around the world and be invited to speak at a lot
of different places, just write a Unix operating system.”
Linus Torvalds

Family:
Linus Torvalds is son of journalists Anna and Nils Torvalds and the grandson of poet Ole Torvalds.

Education
Linus studied computer science in University of Helsinki between 1988 and 1996. His studies was interrupted when he joined in Finland’s army. In 1990, he resumed his studies.

The path to the Linux
He interested in computers began with Commodore VIC-20. After the VIC-20 he purchased a Sinclair QL, which he modified extensively, especially its operating system. He programmed an assembly language and a text editor for the QL, as well as a few games. He is known to have written a Pac-Man clone named Cool Man.

On January 5, 1991 he purchased an Intel 80386-based IBM PC and spent a month playing the game Prince of Persia before receiving his MINIX copy, which in turn enabled him to begin work on Linux.

Name of Linux
Initially Torvalds wanted to call the kernel he developed Freax (a combination of “free”, “freak”, and the letter X to indicate that it is a Unix-like system), but his friend Ari Lemmke, who administered the FTP server where the kernel was first hosted for downloading, named Torvalds’ directory linux.

Linux Authority
As of 2006, approximately two percent of the Linux kernel was written by Torvalds himself. As thousands have contributed code to the Linux kernel, such a percentage represents one of the largest personal contributions to the overall amount of code. Torvalds remains the ultimate authority on what new code is incorporated into the standard Linux kernel.

Torvalds owns the “Linux” trademark, and monitors use of it chiefly through the Linux Mark Institute.

Know more about him(interview with Linus):

I just share little bit information about Linus.  There is lot to know about him.  if you want to know , just search in Google.