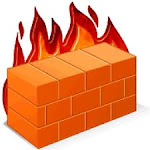 Introduction to firewalls
When you use internet in your college/school/offfice , You may not be access some websites, right? Do you know how they block those websites? They use firewalls for block websites. Firewall prevent the system from hackers attack. Lets us what is firewall.

What is Firewall?
Firewall is working like a security guard standing outside the office. Usually, What the security guard do? He will allow those who has identity card and block those who has not the identity card. Right? Likewise, The firewall will block unauthorized access to the system.
Firewall may be a software or hardware. It will work based on the set of rules defined by the administrator. Using Firewall administrator can block certain website from being accessed. 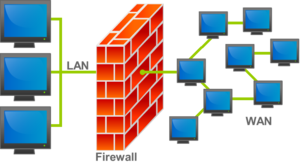 Packet Filtering (Network Layer)
A packet filtering router applies a set of rules to each incoming IP packet and then forwards or discards the packets. Router is configured such that it can filter incoming and outgoing packets. The packets will filtered based on the source and destination IP address.
IP spoofing attack is possible in this packet filtering. IP spoofing can be achieved by changing the source IP address of packets.
Stateful Inspection Firewalls
A stateful inspection packet filters tightens the rules of TCP traffic by creating a state table of out bound TCP connection. If the packet matches with existing connection based on the state table, it will be allowed. If it does not match, It will be evaluted according to the rule set for new connections.

Aplictaion Level Gateway
Application level gateway is also known as proxy server. The user communicate with the gateway using application layer of TCP/IP stack. The gateway asks the user for the name of the remote host to be connected. When the user enters valid user ID, gateway will give access to the remote application. This will block the malicious activity and correct the application behavior. This will ensure the safety of company.
More secure than packet filtering. Easy to log and audit all incoming traffic at the application level. Application-level filtering may include protection against spam and viruses as well, and be able to block undesirable Web sites based on content rather than just their IP address

Circuit Level Gateway
The circuit level gateway works at session layer of OSI model. Monitor TCP handshaking between packets to make sure a session is legitimate. Traffic is filtered based on the session rules. Circuit-level firewalls hide the network itself from the outside, which is useful for denying access to intruders. But they don’t filter individual packets. This firewall is used when the administrator trusts internal users.